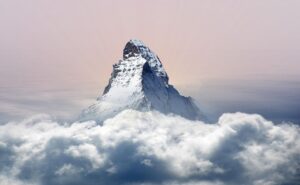 In Southern California some of the hills and lowlands in Riverside County and northern San Diego County are littered with rocks. Many of them are more than mere rocks. They are actually giant boulders. They seem to be stable. None of them have toppled down in our 23 years in San Diego County. They are, you might say, rock solid.

A few years ago I was an interim minister at a church in Riverside County. To my amazement, both the church property and the hilly area near the church were littered with some of these giant boulders. Monstrous, actually, is a better term. Why didn’t people remove them, I wondered?

Well, a church deacon answered that question. On the property adjacent to the church a home builder tried to have some of these boulders removed. A man with dirt moving equipment said, “I can get them out.” He didn’t because he couldn’t. All he managed to do was ruin his dirt-moving caterpillars.

He failed to determine how deep the boulders went into the ground.

He failed to understand how strong and impenetrable the boulders were.

They were not just like any old rock, capable of being tossed aside by human hands or the ordinary machinery of dirt movers.

They were, in a manner of speaking, super-human rocks, incapable of being manipulated and moved at the whim or order of human beings.

Apparently there were—and are—some of these giant boulders in Israel, because in the Old Testament God is often called a “rock,” even given the name “Rock of Israel” (Is. 30:29).

Like the boulders in Riverside and San Diego counties, as a “rock” God is unique.

Hannah, the mother of Israel’s first great prophet, Samuel, was so overjoyed at finally giving birth, she prayed, thanking God with these words: “My heart exults in the Lord;  . . . . There is none holy like the Lord: for there is none besides you; there is no rock like our God” (1 Samuel 2:1-2).

The word “rock,” when used of God is, of course, a metaphor. God is called a rock by different people because he is solid, immovable, and unique. There is no one like our great God. And, as in Hannah’s understanding, God is unique because he alone answered her prayer and miraculously opened her womb and made her capable of having a miracle child she desperately wanted.

There is no one like our God, the Rock of Israel.

In Moses’ song of praise to God in Deuteronomy 32:4, God is a rock who can be relied upon: “The Rock, his work is perfect, for all his ways are justice. A God of faithfulness and without iniquity, just and upright is he.” We can depend upon God to speak the truth in his Word, to defend us, to bring us to heaven as he has promised to do in Jesus Christ, whom he sent to save us.

David also referred to God as a rock when God delivered him from his enemies. “The Lord is my rock and my fortress and my deliverer, my God, my rock, in whom I take refuge, my shield, and the horn of my salvation, my stronghold and my refuge, my savior; you save me from violence” (2 Sam. 22:1-3).

When faced with danger from their enemies, people in David’s time often hid in the many rocks and boulders throughout Israel. It was God, as strong and impenetrable as a rock, who often saved David’s life.

That’s why David would write in Psalm 62:1-2, “For God alone my soul waits in silence; from him comes my salvation. He alone is my rock and my salvation, my fortress; I shall not be greatly shaken.”

Some Christians in today’s hectic, evil, and frightful world seem to think that God is fickle or indifferent if he doesn’t immediately answer their prayers. Atheists want you to believe that God is just a fairy tale who cannot help you because he doesn’t exist. They continually denounce the God they claim is non-existent!

But the ancient Israelites knew the truth about our great God. They called him the Rock because he was their protector, their defense, a place of refuge. The metaphor of a rock expresses God’s might and saving power. And, in the case of Hannah, it speaks of God’s miracle-working power.

The prophet Isaiah, who called God the Rock of Israel, encourages us to place our trust in this mighty and impenetrable rock. “Trust in the Lord forever, for the Lord God is an everlasting rock” (Is. 26:4).

Even if you are sometimes faced with difficult circumstances and troubles—just as King David often was—our God, the Rock of Israel, is right there with you, mighty and unmovable by any negative or opposing force, an everlasting fortress and refuge of integrity and righteousness and power.

God is indeed the Rock of our salvation!