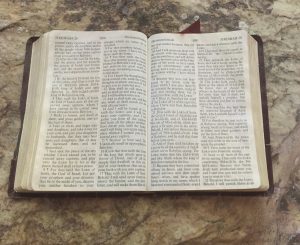 In 2012 Lifeway Research surveyed evangelicals on their Bible reading habits. To the amazement of many, half of those surveyed said they read the Bible sometimes. One in five said they never read it.

Lifeway’s survey does not surprise me. Even evangelicals barely crack open their Bibles on Sunday morning—not unless they are part of an in-depth Bible study.

But don’t worry. I’m not writing this blog to reprimand you and goad you and shame you into personal Bible reading. Bible study, while thoroughly fascinating in regard to the love and grace of God and the life-changing power of Jesus Christ; and therefore character-building and rewarding, can be difficult if you go about it wrong. It can be hard work. And it does take time.

To be truthful we all face the same problems in reading the Bible.

Nevertheless, I’ve been studying the Bible since I was 16.

I have never found it boring—as some claim.

And it is true that some parts of the Bible are difficult to read.

But to this day the Bible is, for me, always enlightening, encouraging, comforting, correcting, purposeful, and challenging. It is so because it really is God’s inspired Word.

If you are one of those believers who rarely if ever reads the Bible, whether you are an evangelical, a mainline church member, or never go to church, here are a few reasons why you may have been turned off to Bible reading which you have likely never thought about:

(1) The rants, false accusations, and outright lies of atheists may have corrupted your thinking regarding the Bible.

Society, that is, writers and commentators and newscasters who are not believers (maybe they’re atheists themselves!) love to quote atheists to poke fun at Christians. If they can prove us wrong, if they can believe that God might not exist, if they can classify the Bible as an evil book as atheists Richard Dawkins and Christopher Hitchens claim, then they can feel comfortable in their sins and not worry that they will have to give account of their lives to God someday.

Dawkins, in his book The God Delusion (2006, pp. 51-52), calls the God of the Bible  “a malevolent bully,” and “a petty, unjust, unforgiving, control freak,” among other vicious names. Hitchens, who died from cancer in 2012, all the while vowing to never believe in God or Jesus Christ, claimed that Christianity and the Bible have poisoned all societies they touched.

Atheists like Dawkins and Hitchens and the long-dead Bertrand Russell all suffer from the same ignorant understanding of Christianity and the Bible. Along with the ignorance is their continual non-stop lying about who and what Christians are, what the Bible teaches, and the history of Christianity.

Dawkins, for instance, claims that Christianity grew through use of the sword. This is an outright lie. Not even in the ill-fated Crusades did Christians order people to submit to Christ or be killed. Islam started this practice after Muhammad’s death in A.D. 632, and some Muslims continue this use of the sword (now usually a gun) today. Become a Muslim, pay them tribute, or be killed. This is what ISIS tells Christians and others—even Muslims in sects they don’t like. Some Muslims in countries around the world do the same.

But Jesus said, “Love your enemies and pray for those who persecute you, so you may be children of your Father in heaven” (Matt. 5:44-45).

Christians have always evangelized by love and example and a witness to Jesus Christ’s life-changing power—never by the sword.

The truth about atheists is that they don’t want God to exist so they won’t have to be accountable to him for their lives. Furthermore, it is ludicrous and hypocritical for atheists like Dawkins to call the Bible “evil” when atheists believe nothing is in and of itself evil. After all, if no God exists then not even atheists can tell us what is good or evil.

There is a delusion going on in Dawkins mind, but it involves himself, not the reality of God.

And what about his and other atheists continual railing against the God they don’t even believe in? Why bother with all that hatred, all that negative energy, all those acrimonious words—not to mention all that lying—against something (in this case someone) you don’t believe exists?

Despite his protests to the contrary, I suspect there is a part of Richard Dawkins that really does believe God exists. He keeps fighting it, but in the end it will be to no avail. I hope and pray, unlike Hitchens, he finds God’s reality before his soul goes to eternity.

Regarding the Bible, atheists have nothing good to tell us—only lies and falsehoods. Atheism does not promote Godly living nor bring God’s blessings into our lives. On the other hand, the point of the entire Bible is that God loves us and wants us to acknowledge him through faith that he might bless our lives. He loves us so much that he sent his Son, Jesus Christ, to be the world’s savior.

Don’t let lying and foolish atheists corrupt your thinking about the Bible. It really is God’s inspired Word!

(2) Liberal Bible scholars in the Church might have convinced you that we can trust very little in the Bible because it’s full of myths—made-up history and fictional tales—even about the life and teachings of Jesus Christ.

Although attacks on the Scriptures have occurred throughout Church history, they began in earnest especially against the New Testament and the life of Jesus Christ in the late nineteenth century. However, few people in the pews heard about the denials of the truth of the Gospels because they were made primarily by academics and philosophers and even non-biblical scholars like Albert Schweitzer. Unless pastors read these works and commented on them in Sunday morning sermons, few laity ever heard denunciations of the Bible.

But that all changed in 1985 with the media appearance of the Jesus Seminar, a group of supposed New Testament scholars who studied, met and voted with little colored balls to tell us whether the words of Jesus in the Gospels were really said by him or not. Mostly, they voted “no,” or “probably not.”

Robert Funk, who founded the Jesus Seminar in 1985, said he did so because he was disgusted that people in the Church actually believed “the superstitious nonsense of the New Testament in regard to Jesus.” The group’s conclusions, however, were nothing more than subjective decisions on what they thought Jesus didn’t say or what they did not want him to say.

Were they walking with Jesus in Galilee and along the streets of Jerusalem? No!

Did they sit down with Jesus at campfires and in homes and listen to his parables or talk about God with him? Of course not!

Did they see the miracles of Jesus they don’t believe happened? Never!

It’s ludicrous to believe that members of the Jesus Seminar, like John Dominic Crossan, Marcus Borg, or even Robert Funk himself could boldly and honestly pronounce the words and deeds of Jesus fiction.

Robert Funk died in 2005, and with his death so did the Jesus Seminar, although the many writings of Crossan and Borg are still around. The Seminar got few real scholars—at least those who respect and love the Bible as God’s inspired Word—to believe any of their nonsense and outright lies. However, inasmuch as their work was made public through an eager media, some Christians have understood their works to be “real” research.

Their denials of the Bible’s integrity and authenticity are based solely on one errant philosophy: “We don’t believe the Gospels. Therefore they can’t be true.” This isn’t scholarship. This is faithless dishonesty.

The Jesus Seminar was helped along by another so-called scholar, John Shelby Spong, who is a retired bishop in the Episcopal church. Spong has written many books—all heralded by an eager media—trashing Christianity and the Bible, which, he says,  is “full of errors and repugnant.” He claims it was written by ignorant men with narrow minds. It was not at all inspired by God—the God he doesn’t believe in.

Spong—despite his protests to the contrary—is really an atheist trying to tell Christians what they ought not to believe. He sees the God of the Bible as a human invention, a mere “thought” within the minds of men. He is furious that the God of the Bible makes ethical demands upon human beings, especially when neither God nor eternity exist.

Hitchens and Funk—like many ignorant and angry Bible-haters before them—have already gone to eternity and the realization that God does exist, that everything Jesus told us about righteousness, eternity, and God’s love for all human beings is really true. But it’s not too late for Spong to find the reality of Jesus Christ on this earth.

And he can if he will open his heart to the God who loves him.

Don’t let ignorant Bible-haters who pass themselves off as New Testament scholars corrupt your thinking regarding the Bible. It really is God’s inspired Word!

(3) Lastly, don’t let society itself—whether American, European, or any other culture—tell you that the Bible is full of errors, contradictions, or merely the product of the human mind. Society, after all, doesn’t read the Bible and knows nothing about it except what it wants to believe from the reports of those who decry the Bible. People who ridicule the Bible do so to excuse themselves from their sins. But they will have to face God with a black heart   because. . .

That reality alone is enough reason for you to read the Bible. But here are a few more reasons why you—a valuable human being whom God loves—should dig into God’s own Word:

The Bible is the  Church’s book of comfort, righteousness in the will of God, spiritual power in Jesus Christ, inspiration to be all we can be, and the book of promise of eternal life.

Even so, you might be thinking, the Bible is still a difficult book to read. The truth is that some people make it a hard book to read and give up on it. But I once knew a former druggie whose mind was frayed from so much pot that he was a terrible reader. Yet when he let Christ into his heart he could read the King James Bible, the most difficult of all Bible versions! God opened his mind because he asked God to open it.

You can read the Bible. Here are a few tips to help you:

Because . . . when we study the Bible with eager and open hearts, God’s Spirit meets our spirits and enlightens and energizes our lives in Jesus Christ.