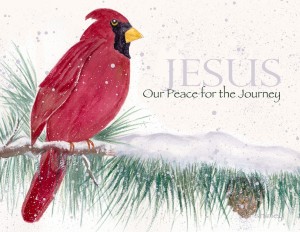 Every Christmas world leaders from Pope Francis to President Obama to President Hollande of France, and others, urgently call for peace. Church pastors and Christians everywhere—and even people who don’t talk to God much throughout the year—pray earnestly for peace.

Well, some people don’t. America’s politicians barely stop squabbling long enough to eat a prime rib Christmas dinner with their families! The President has to stay near “the phone” because he never knows when terrorists will launch more attacks, or whether Iran or North Korea, ever-threatening the world, will begin carrying out their evil desires.

Israelis, though they do not celebrate Christmas as a nation, nevertheless live among many Christians who do. After all, Christmas began in Bethlehem. But neither Jews nor Christians can have rest or peace because of the daily threats of knife attacks and missile strikes as Palestinians are urged to kill Jews.

Terrorists, like ISIS, will never have peace because they don’t want it for anyone—not even for themselves.

Yet long ago, at the first Christmas, God promised peace to people of good will. The Gospel writer Luke, who said he was a careful researcher, tells us that an angel of God appeared to a group of shepherds in the fields near Bethlehem. From a bright light—the glory of God—he told them, “I bring you good news of great joy to all people,” and announced the birth of “a savior, who is Christ the Lord.”

The angel further told them to go see the babe in a manger in Bethlehem, as a sign from God.

Suddenly the heavens exploded with a chorus of angels praising God and saying,

“Glory to God in the highest, and on earth peace among men (people) of good will.”

Then the angels left, and the shepherds hurried to find the newborn baby. Find him they did in a manger behind the inn (not in a cave), just as the angel had told them. They returned to tending their sheep on that star-filled night, glorifying and praising God for all they had heard and seen (Luke 2:8-20 tells the whole story).

It’s unfortunate that some scholars and Bible translators don’t think I’ve told the story exactly. They believe it’s impossible for people to have “good will” unless God gives them good will. So that phrase in most Bibles is translated “with whom he is pleased” (NASB), or “on whom his favor rests” (NIV), or “those whom he favors” (NRSV).

The problem with these translations from the Greek language is that none of them are what Luke actually wrote in 2:14. All of the oldest and best Greek copies of Luke including Sinaiticus and Vaticanus, from the 4th century, and Alexandrinus from the 5th century, as well as the Old Latin, the Vulgate, the Coptic from Egypt, and others, say something different from our modern versions—just as my translation reads.

And Bauer/Arndt/Gingrich’s Greek-English Lexicon of the New Testament, the standard lexicon in New Testament Greek studies, translates the last three words in Luke 2:14, “among men of good will.”

Unlike English, Greek nouns have “cases,” like Latin. The Greek word for “good will” is in the genitive case, indicating a possessive, usually translated “of” someone or something. A few much later Greek manuscripts of Luke changed the genitive to a nominative case, making “good will” the object of the verb. However, to read well as a nominative, many words have to be added in English, like “who” “whom” “those” “all” “toward” and “God”—all used by modern translators.

Since changing the genitive to a nominative in the Greek word for “good will” involves merely dropping a final “s” it was likely just a scribal error, one of many variants in the Greek New Testament.

To translate the Greek word as a nominative is to ignore all the earliest and best Greek texts and give the verse a Calvinistic interpretation, i.e., that human beings have no innate good will.

How could that be since God created human beings in his image? John Calvin believed that ever since the Fall in the Garden of Eden, when Adam and Eve disobeyed God and were kicked out, human beings are “totally depraved,” incapable of any good or even having good will.

But total depravity is not a teaching of Scripture.

If God has good will, human beings created in his image can have good will. It’s true that in the Fall man lost his innocence and is stuck with a sinful nature. But this does not mean that all human beings are incapable of doing good as Calvin believed.

In Psalm 34:14 God says, “Depart from evil, and do good, seek peace, and pursue it.” And Psalm 85:8 says, “Let me hear what God the Lord will speak, for he will speak peace to his people, to his faithful, to those who turn to him in their hearts.”

Why would God tell people to depart from evil, to do good, and turn to him for peace if they are incapable of doing any of these things?

In the New Testament, the apostle Paul plainly says that everyone has sinned and fallen short of the glory of God (Rom. 3:23). However, earlier in this same letter he points out that people are capable of seeking God and being good. In Romans 2:9-11 he wrote, “There will be anguish and distress for everyone who does evil . . . but glory and honor and peace for everyone who does good, the Jew first and also the Greek. For God shows no partiality.”

People—even unbelievers—are capable of doing good and having a measure of peace in their lives.

I suspect there has been no greater time and place of peace on earth than that first Christmas day when Jesus, the Son of God, was born of Mary, a virgin by God’s will and design, in a stable in Bethlehem.

The great tragedy of world history, however, is that even though God promised peace to people of good will, peace is hard to come by on this earth.

Too many people don’t really want peace and therefore will never have it. Brutal killers like ISIS foment horror and misery upon anyone they don’t like, even their own. They have no peace with God, who they don’t know, nor peace with their neighbors. Nor do they have peace with themselves because they will always fall short of realizing their self-initiated goal of conquering the world by killing as many of their enemies as they can. In the end they will suffer the inevitable fate of eternity without God—an eternity where peace does not exist.

It doesn’t have to be this way. God has promised them peace, but on his terms, not theirs.

Evildoers and atheists also don’t have peace because they don’t want it. Both live their lives apart from God—the giver of peace in Jesus Christ, who is the Prince of Peace (Isaiah 9:6).

Evildoers (e.g., sex and drug traffickers, murderers and thieves) stir up strife by their evil, always seeking more ways to sin against God and their fellow human beings, bringing misery and despair to God’s world.

Atheists live restless days, often seeking Christians to try and dissuade from our faith in Christ and God’s goodness. Peace escapes them because their lives are never fulfilled.

It doesn’t have to be this way. Sinful people and atheists alike have been promised peace if they will turn their hearts to God in Jesus Christ, who was born in peace to give us peace.

Another group of people—who ought to know better but don’t—also have little peace in their lives. These are Christians who are suspicious of other people who call themselves Christians but don’t look or act like them or believe everything just like them. I’ve met and even worked with these suspicious Christians who have no peace because they are always on the lookout for Christians tainted by any variation of one’s perfect model of a “real” Christian.

They can only have peace with God and peace with themselves—not to mention peace with their fellow Christians—when they do what Jesus said, “Just as I have loved you, you also should love one another” (John 13:34).

Stop the suspicions and accusations and be at peace!

Anyone who wants peace—whether a radical Muslim, an evildoer who preys upon others, or an avowed atheist—can have it in Jesus Christ. He gives us peace with God, peace with ourselves, and peace with others.

Paul wrote in Romans 5:1, “Therefore, since we are justified by faith, we have peace with God through our Lord Jesus Christ.” Placing our faith in Christ gives us peace with God because our sins are forgiven forever, and we become united with God.

In Acts 10:36 Peter said that God came to Israel, “preaching peace by Jesus Christ.” Both Peter and Paul were sinful and violent men who gave their lives to Christ. In return, peace with God, peace within themselves, and peace with their fellow humans filled their lives.

There is no peace in our strife-torn and sin-degraded world. But in Jesus Christ there is peace, the peace God promised to anyone of good will, who would come and receive Jesus Christ into their hearts, the Good News the angel promised to the shepherds in Bethlehem long ago.

Some ISIS militants have found peace in Christ when they determined—by their own good will—to leave their hateful, killing machine. Evildoers have found it when they did the same. And atheists too, when God tugged at their heart strings, accepted his existence and received Christ into their hearts (I’ve known a few!).

Anyone can have Christmas peace. You can find it in Jesus Christ. He’s waiting to give you his peace.

And it’s a peace that will dominate every day of your life forever!